Well, I've decided not to use the Minwax stain after all, and to just move forward with diluted TransTint dye. So I guess I'm no longer an idiot for not noticing I could've just used the Minwax, because I don't want to use it anyway. Part of the problem I was having with TransTint dye is that I was trying to get a red mahogany color by mixing brown mahogany with a pure red dye to make red mahogany. It was making my test pieces turn a little pinkish in hue. So instead of doing it this way, I just broke down over the weekend and picked up a bottle of Transtint red mahogany dye.

I think I'll contradict myself and just say, that I do after all, prefer TransTint dye diluted with water, over everything else I've yet found, as it goes on looking like a pure color, without an oily residue, and it still highlights the grain. I don't think the wetness of the water is going to cause much of a problem with warpage, as long as I don't go overboard in application, and I allow it to dry thoroughly.

A few things contributed to my ultimate rejection of Minwax stain. It's oil based, and rather stinky. Also, I recently read an online forum discussion, where a luthier I greatly admire had only negative things to say about "Ace hardware finishing" solutions. They generally might be "good enough," but good enough is never good enough.

I also learned that the "fuzzy" look I was getting was due to my over-sanding. I sanded my surfaces to 400. I thought smoother was better. This isn't actually true, it turns out. So I lightly resanded everything to 220.

A Martin authority tells me that Martin mahogany stain color is achieved by first applying red mahogany, then brown mahogany. So I did that. I mixed a semi-weak solution so that I can "creep up" on the shade that I want. I started on the back, and applied two coats of red mahogany, followed by two coats of brown mahogany. I waited a few hours in-between coats, so that the wood wouldn't get too soggy.

First a coat of red. These pics appear darker than what the wood looks like. 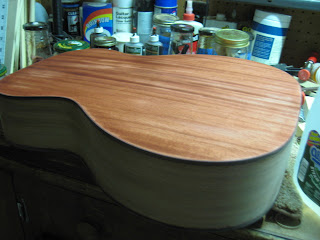 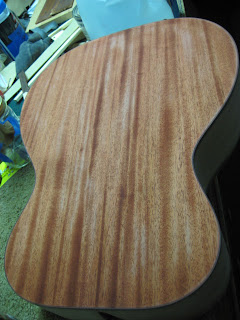 Then I touched up the red some. 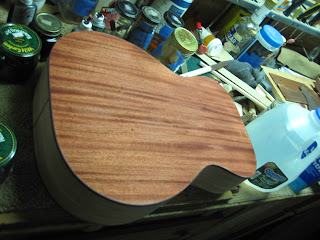 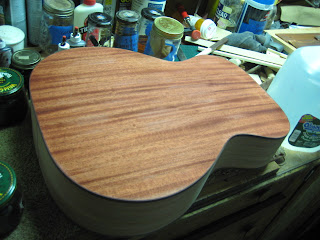 Then I added brown. 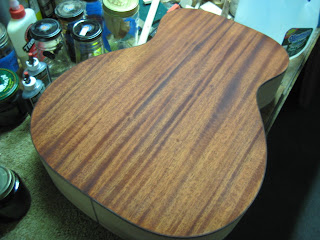 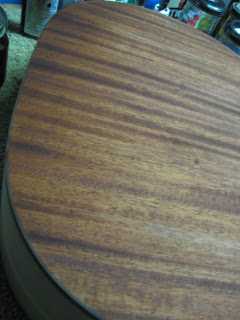