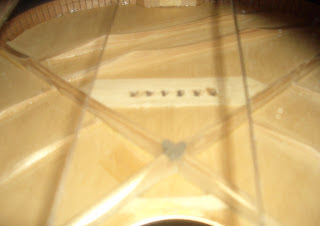 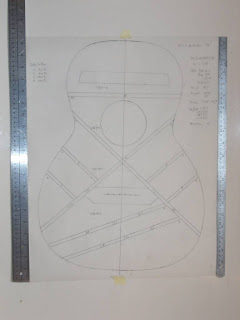 Also, according to the same source, "the tone bars were angled more parallel with the length of the guitar and further apart. These late-1938 to late-1944 guitars had deeper scalloped braces than the 1938 and prior forward or advanced braced guitars." Here are plans for a Martin-style 00. Specifically which year, or era, is not yet determined.

The following information about back braces comes from John Arnold:

After looking at some measurements, I think that the nominal height was 3/8, but some of them have measured as low as 0.320" (basically 5/16"). I have never seen any that were 1/4" high. In general, the #3 brace is a bit lower than #4.
Some of the confusion may arise because those braces are so rounded that getting an accurate measurement of height can be tricky, especially through the soundhole.

And then this info comes from Willi Henkes:

This info about bridge plates comes from http://www.provide.net/~cfh/martin.html

1932: bridgeplate were enlarged from 1" to 1 3/8" on all belly bridge styles (style 18 and higher). Style 17 (mahogany top) models that didn't get a belly bridge stayed with the smaller 1" bridge plate.
Here's a full bracing chronology from the same source:
ANECDOTES

"Some [UMGF] members who have inquired about a custom 14-fret 00, were told by Martin that shifting forward is not possible. I wonder why that is. Perhaps it's a practical thing that has to do with existing jigs and setup. However, from what I've heard, some were told that shifting forward was physically not possible as for instance it would make the X-arms end up in the upper transverse brace. That certainly is not the case."

Metropo @ UMGF:
Also, being "00" size top braces, they are shorter....9/16" vs. 5/8". The reduction in height is more important, since stiffness is proportional to the cube. That means that 9/16" tall braces are 37% less stiff than those that are 5/8" tall. OTOH, stiffness is directly proportional to the width, so 1/4" wide bracing is 20% less stiff than 5/16".
The height/cube relationship is the reason that scalloping braces changes the sound so dramatically, and the reason that many amateurs scallop too much. A few thousandths of an inch can make a world of difference.

And here are some general pictures of bracing in non-00 pre-war Martins.

And an example of "tucked" braces: